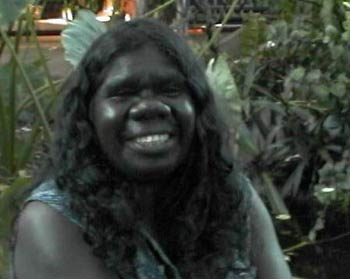 Ju Ju was born at Mantinea Flats in the East Kimberley.  She was educated at Beagle Bay.  She is of the Mirruiwong/Gadgerong group and her Aboriginal name is Burriwee – but to everyone she is “Ju Ju”.  Mother of six, tour guide, much sought after cultural advisor, expert in bush tucker, bush medicines, advisor to those publishing booklets on these subjects – she has made numerous appearances on Television regarding these topics.  Ju Ju is a renowned didgeridoo maker, both carves and paints boomerangs and is an authority on rock art and sacred sites and speaks five dialects fluently.

Ju Ju is a member of a well known painting family – her grandmother Sheba, her mother Freda (dcsd.) and her daughter Reagan – four generations of very talented ladies.

Her paintings and artefacts are collected world-wide.  In 2002 Ju Ju was asked to paint trophies for the Dubai Racing Club, home of the World’s Richest Race Meeting.  These trophies featured Australian Indigenous Animals and were stunning.

Ju Ju favours detailed subject matter in fine palette ochre – and because of her family connections, the content of her paintings range from the land around Kununurra to Purnululu (Bungle Bungles) and Rock Art.